Cutting Out the Middleman 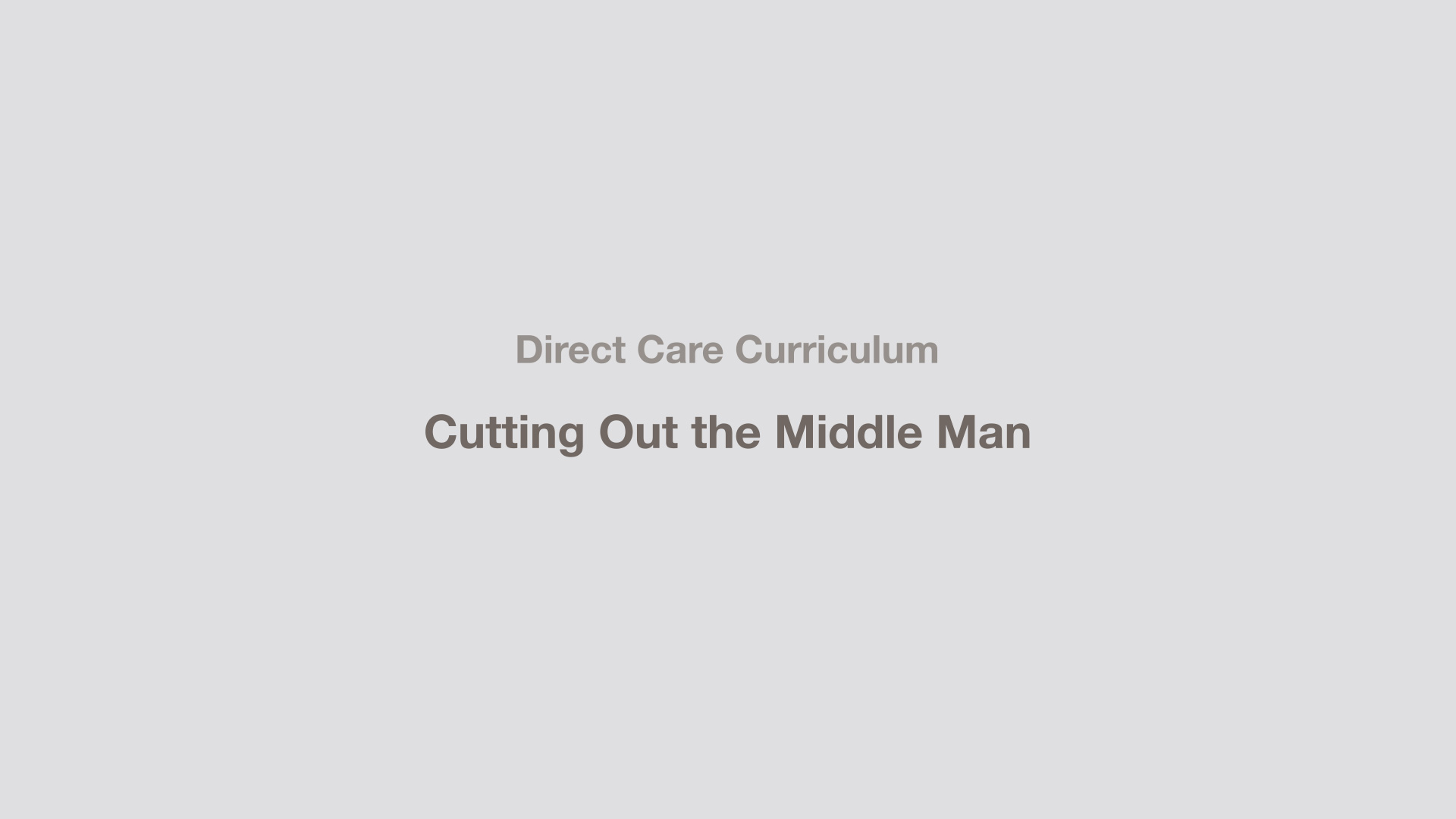 Affordable primary care cuts out the middleman, and makes actual care actually accessible, all the time. We do encourage wrap-around insurance, available (ACA-permitting) at low rates, with slightly higher deductibles. We have shown that seeing a direct primary care specialist, who is able to prescribe wholesale prescriptions, and who can negotiate with specialists for additional treatment (optometry, CT-scans, etc.), can actually SAVE money for patients, and keep them healthy/safe. 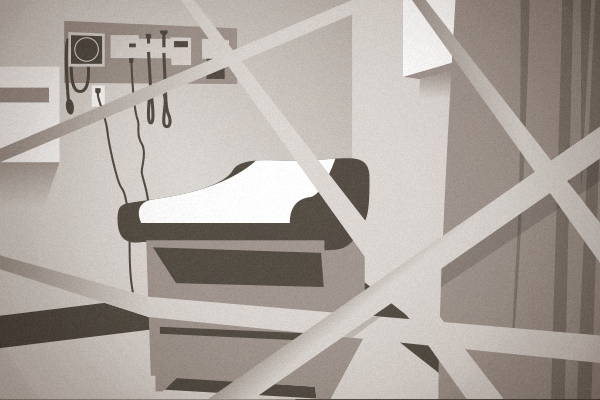 Think about it: If one doctor leaves his 3,000 fee-for-service patients, it could be viewed as -3,000; but what if over time he inspires five new doctors to join Direct Care? Together, these six doctors can see more patients, more efficiently. In the end, it’s a matter of cutting the red tape.

Direct Care is built to cut red tape, so there are many ways within the business model to do it. Everything from running your own in-house pharmacy, to handling your own billing, to setting your own pricing structure plays into the idea of giving you more control.

Dr. Michael D. Shaw takes us to the heart of what Direct Primary Care is all about in his contribution to HealthNewsDigest.com.

“The doctor/patient relationship has deteriorated precisely because the patient is no longer the client.”

The moment physicians are forced to turn their attention from a patient, hold up one finger as if to say, “Hold on.” and become engaged elsewhere is the very moment the doctor-patient relationship begins to break down. It’s all traced back to the fact that physicians must see so many patients in such a short amount of time… and are therefore forced to spend on average a mere 7 minutes with them during the appointment.

It’s the red tape that gets in the way of reading between the lines of what a patient is saying. It’s the brain barrier that doesn’t allow docs time to research new and innovative ways to handle cases. It’s the time suck that chains physicians to their desk long after the lights go off just to keep up with all the paperwork.

When the red tape disappears, so many good things begin to happen! Among them:

Read the full article over here. >

Research suggests that preventing illness won’t curb rising healthcare costs. So how about we just cut the red tape?

Spending on healthcare has consistently grown faster than the rest of the U.S. economy. What’s behind this trend is less certain, though. Economists point to two causes: the prevalence of diseases and conditions afflicting the U.S. population, and the rising costs of treating diseases.

Research from American University Associate Professor Martha Starr and Virginia Tech Research Professor Ana Aizcorbe shows it is the latter, with higher prices for treatment accounting for 70 percent of growth in healthcare spending.

“Rising costs of treatment have had a much greater impact on driving up average spending than increased disease prevalence,” Starr said. “To tackle the problem of health care spending from a policy perspective, solutions need to focus on slowing growth of spending on procedures, treatments, and drugs used to treat given diseases and conditions. Of course, slowing or reversing the rise of chronic conditions would be beneficial for the health and well-being of the U.S. population, but by itself it won’t put much of a dent in health care spending growth.”

How about we cut the red tape, then?

The research findings appear in the May issue of Health Affairs. The researchers examined data from four nationally representative surveys from 1980 to 2006. They analyzed how shares of the U.S. population afflicted with different diseases and conditions and the costs and services used to treat them contributed to growth in average spending on healthcare, adjusting for inflation.

“In contrast to earlier studies on health care spending, we analyzed data that covered a longer time period and the full range of health care cases,” Aizcorbe said.

Costs of treatment have increased due to both rising prices of healthcare services and more intensive use of services to treat diseases.

Particularly hefty growth was associated with rising average costs of routine care, which more than doubled over the period to $602 per person per year in 2006.

Keep in mind that current doctor workloads are burning physicians out of practicing at all. And that every day, fee-for-service doctors do TWO HOURS OF TRANSCRIBING, just to get paid. They then have to increase costs for uninsured patients just to make up the difference for what insurers refuse to pay them.

It’s like we’re living in an arms race of costs.

Increased cases of chronic conditions such as diabetes, heart conditions, high cholesterol, and mental disorders boosted healthcare spending as well, but in a much more modest way.

However, they are costs. Even if they aren’t the highest contributing factors of rising healthcare costs, they still cost lives, and quality of life. And it’s a known fact that if we can see patients, and listen to them, we can, overall, lower the occurrence of these conditions.

When examining rising healthcare spending, economists look at population aging and shifts in insurance coverage. Starr and Aizcorbe found these played minor roles over the 26-year period. And even though rising disease prevalence from 1997 to 2006 stood out, it still accounted for only one-third of average spending growth. The researchers also noted that had there not been a steady shift away from the use of hospital services, the rate of spending growth would have been well above 3.5 percent per year.

Researchers warn that even while shifts from hospital-based care to office-based care and prescription medicines for diseases and conditions may lower healthcare costs, intensified use of these services could drive up costs.

Well, not if a subscription model is implemented.

They also warn that the use of “more expensive items” such as brand-name instead of generic medications, risks driving up costs, too.

Maybe tell that to big pharma. Consider, in the US, drug companies spend $19 billion a year on promotions. Traditional healthcare delivery systems focus on treating the sick and injured. But what about keeping people well?

The Commonwealth Foundation admits, “Although primary care is fundamental to health system performance, the United States has undervalued and underinvested in primary care for decades.”

“Going forward it will be important to make sure intensified efforts to promote preventive care do eventually work to slow growth in spending on acute care.”

Well. Here at Atlas MD, we pay three and 1/2 cents for an EKG strip, two dollars for an A1C test, a buck for a lipid panel. And we charge our subscribers nothing for them.

In South Portland, Maine, Dr. Michael Ciampi took a step last spring that Bangor Daily News said some physicians would describe as radical (not us, though). He reclaimed his practice from the Mercy health system because he found that patient care was too impersonal. Then he stopped accepting insurance and Medicaid so that he could work more directly with his patients. Earlier in 2013, Ciampi sent a letter to his patients informing them that he would no longer accept any kind of health coverage, both private and government-sponsored. Given that he was now asking patients to pay for his services out of pocket, he posted his prices on the practice’s website.

“It’s been almost unanimous that patients have expressed understanding at why I’m doing what I’m doing, although I’ve had many people leave the practice because they want to be covered by insurance, which is understandable,” Ciampi said.

Before the switch, Ciampi had about 2,000 patients. He says he lost several hundred, which is disappointing. But imagine if he’d left medicine entirely. That’s 2,000 patients that would have had to find a doctor, and 1,800 who wouldn’t be getting cash-only medicine from a doctor they trust.

The decision to do away with insurance allowed Ciampi to practice medicine the way he saw fit, he told the Bangor Daily News. Insurance companies could no longer dictate how much he charges. He could offer discounts to patients struggling with their medical bills. He could make house calls.

“I’m freed up to do what I think is right for the patients,” Ciampi said. “If I’m providing them a service that they value, they can pay me, and we cut the insurance out as the middleman and cut out a lot of the expense.” Ciampi, like us, expects more doctors to follow this path. That’s because even with the small loss of patients, Ciampi expected his practice to perform just as well financially, if not better, than before he ditched insurance.

“I’ve been able to cut my prices in half because my overhead will be so much less,” he said.

Before, Ciampi charged $160 for an office visit with an existing patient-facing one or more complicated health problems. Now, he charges $10-$100 per month for a subscription. Patients with an earache or strep throat can spend $300 at their local hospital emergency room, or promptly get an appointment at his office and make no additional copay.

That time is crucial to Ciampi. When his patients come to his office, they see him, not a physician’s assistant or a nurse practitioner, he said.

“If more doctors were able to do this, that would be real health care reform,” he said. “That’s when we’d see the cost of medicine truly go down.”

Amen, Dr. Ciampi. And considering the fact that cash-only medicine improves satisfaction and income, perhaps more doctors will follow suit. How about that for addressing an ever-widening doctor shortage in the U.S.?

Now that you know the basics of Direct Care, are you still wondering if it’s the right path for you? The next section talks about the characteristics necessary to run a DPC clinic. And there’s good news – these traits can be acquired! So, is DPC right for you?